Travelling to Sicily is a must-do-before-die for all passionate foodies around the world. The flavours of Sicily have been spread around the world by modern time migrations. You can find a Sicilian restaurant in every country in the world, from Australia to Canada, from Egypt to Ecuador. Sicilian cuisine is unique, not only for the richness of its recipes but above all for its variety. Every single recipes brings tracks of past dominations, from romans to greek to arabs to spanyards! 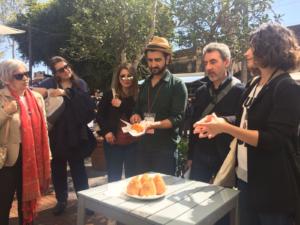 There are tens of foods and recipes only available in the biggest island of the Mediterranean sea and there are two top ambassadors of Sicilian food worldwide renowned: one is definetely the Sicilian cannolo (read our blog post) and the other one is the Arancina. What???? You joined the Catania street food tour and you ate it as Arancini with I!? Yes you did!

You are not crazy…it’s a long story. Take a sip and read…

The arancini is a thousand year old recipe born in the big strong hands of Normans of Sicily (XII century AD). The birth of Arancini is dated back to the middle age time when the breading gets introduced in the Sicilian cuisine as effective method to turn food into take away street food.

This is what happened to our beloved arancini! Once upon a time in Sicily an arab risotto with veal meat and vegs….Once upon a second time a risotto that turned into a take away street food when hunting required a new tasty invention to keep up men’s energy.
It’s not about food, it’s all about history.

13TH OF DECEMBER, THE ARANCINA DAY

Yes my dear foodies, there is a day in Palermo when all families give their best to cook the most delicious home made Arancinas. But why December 13th, why on St.Lucy’s Day?
Must know that Sicilians are very devoted to St. Lucy. According to the legend, St. Lucy helped Sicilians survive the famine on two different occasions. How? by delivering to the port of Palermo and Siracuse ships loaded with grain. Imagine the reaction of hopeless poor Sicilians starving for months when this miraculous event happened. The hunger was so violent that wasn’t given time to the grain to turn into bread or pasta. What survives about this tradition is the commitment of not eating processed grain on December 13th. What happened next? Palermitan private cooks came up with a great idea…no pasta? no bread? it’s rice arancini time! The traditions still goes on. And if you want to join the tradition, connect with Mamma Streaty on December 13th and learn how to make arancini! It’s an exclusive one time event! Reserve your spot click here!

Many travellers get shocked when Streaty guides during the Palermo street food tour reveal that the original arancina shouldn’t have any tomato sauce nor mozzarella inside as most of deli shops make it. Easy to understand why, isn’t it? 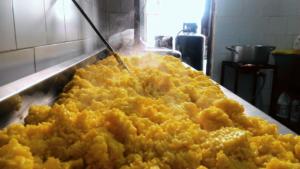 The tomato was totally unknown in Europe until the end of the XVI century and only enter the southern Italian cuisine at the beginning of the IXX century, which means that the ancestors of arancini could not be stuffed with tomato sauce. In fact, the original recipe of the Arancini would only have the following ingredients… 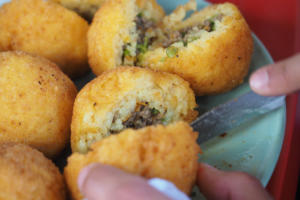 The rice is the base of it. We can simply call the arancini a rice ball that resembles…guess what…an orange (tr. arancia) of course! This is where the name and the shape come from!

Safron is the identification mark of arab cuisine, veal is what arabs can eat without breaking Al Qur’an Al Karim rules. Vegs are the gentle treat, breadcrumbs is the closing gate, lard is the tasty irresistible final touch. So why do you usually find it with tomato sauce? Simply because tomato sauce is cheaper than safron and it’s also an easy ingredient to manage in big quantities. Join our Palermo food tour if you wanna take a bite at the original recipe of Arancini.

To be an arancino or to be an arancina, this is the question! We kindly ask you to read the following lines with great attention since we are entering one of the most sensitive Sicilian language issue. The island of Sicily is facing a tasty civil war for ages and the cause of it it’s a simple vowel. In fact, you must know that western Sicilians call this delicious rice ball Arancina with A whereas eastern Sicilians call it Arancino with O. Sure, you only knew Arancini! Well, arancini with I is the plural form of the term Arancino with O.

The reason why eastern Sicilians use the masculine name to refer to this delicious Sicilian street food, it’s because in Sicilian language the term “orange” sounds “arancio”. In conclusion, the term Arancio with O brings to the Sicilian street food Arancino with O. Grammarly speaking, western Sicilians stand for the feminine form of the name. “L’arancina è fimmina!” we keep saying. Why this? Well…because in Italian language the orange is called “Arancia”. Arancia with A brings to Sicilian street food Arancina with A. Clear isn’t it?
So who’s right and who’s wrong? Let’s say that since the Arancini is a Sicilian street food specialties it would be more correct to call it Arancino (sing.) or Arancini (plur.). However, the issue is much more complicated coz the final sentence can’t but consider another aspect of it…the shape!

THE SHAPE: ROUNDED OR CONIC 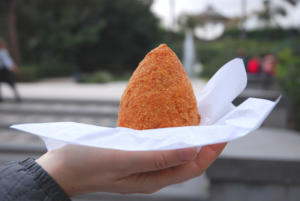 Since the name of the Arancini comes from the orange fruit, the correct shape should be the one of a rice ball, the way western Sicilians make it (Palermo, Trapani, Caltanissetta). In the east of Sicily the shape is different. The arancini you find in Catania, Taormina or Messina are shaped like the volcano Mount Etna! A very romantic idea isn’t it? However, the shape does not match with the one of an orange. In this case Western Sicilians win! The Sicilian Arancini should be shaped like a rice ball, an orange!

You must know that the vowel issue is quite a big issue for Sicilians. The rival cities of Catania and Palermo are pretty serious about it. Calling this delicious street food Arancino or Arancini in Palermo, sounds like an insult. Very disrepectful. Same if you go to Catania and order an Arancina or Arancine, Catanesi’s ears will tremble and their eyes turn red. So pay attention! call it Arancina if you see it shaped like an orange. Call it Arancino if you see it shaped like a vulcano. If you get in panic about this, simply point at the counter and say “uno” (tr. one of those).

To give you a clear example on how serious the Arancini’s vowel war is, I will tell you the story of the disastrous Moretti beer promotion. 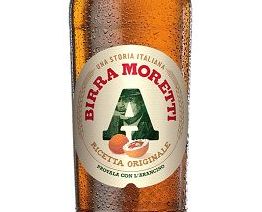 In 2017 the Moretti beer brand (most distributed beer in Italy) launched a new line of labels suggesting some food to pair with the beer. The Sicilian label would read “Prova birra Moretti con Arancino!” (Tr. Try moretti beer with Arancino!). In few hours the Facebook page of Moretti beer was invaded by a tsunami of insults sent by Palermitans starting a boycott Moretti beer campaign!

The Arancini story is a clear evidence of the importance of food at a cultural level. It’s not about a vowel, it’s not about a recipe. It’s all about being right, being better, being what we are.