During your walk around the alleys of Venice you will bump into several wells positioned right in the middle of piazzas. However, you will realize that these little squares are called “campo” (tr. field), coz actually they were farming fields! and the well was proudly emerging in the middle of it to supply water. See, this is what makes the difference  when you visit the city with a local tour guide, you see and understand things that otherwise you wouldn’t even notice! Join A food tour in Venice with us to get this matrix effect 😉

What’s the matter with water in Venice?

While wandering around Venice, you will notice that in the middle of a square or in the biggest calli, there are some structures made with white stone and covered with metal; those are the Venetian wells. The supply of drinking water has always been a problem for Venice, the water inside the canals is salty and there are no sources of drinking water in the islands of the lagoon; Venice is in fact a city that, as the historian Marin Sanudo says “is in water but has no water”.

At the time of the first settlements, drinking water was imported to Venice from springs located in the mainland; as the population increased, this operation became extremely expensive, so they decided to start building cisterns to collect rainwater. From the outside those cisterns look like a well, but they were built in a different way. To built them, they dig a hole 3 or 4 meters deep, excess soil is removed and the bottom is covered with a layer of clay to prevent infiltration. The excavation is finally filled with river sand which acts as a natural filter, rainwater is collected through manholes placed on the surface, the sand filtered the impurities and only clean water was then accumulated in the center of the tank. Water was finally collected by people who lived nearby through a pulley system; common citizens used the public wells, while the noble families had their own private cisterns inside their buildings. At the beginning of the 1300s in Venice there were around a hundred of wells, during the 19th century there were about 7,000 of them! Today there are around 600 wells but no longer functional, they are there just for urban decoration!

In the name of the holy brotherhood

The wells are made of Istrian stone, which makes them very resistant to erosion and are often decorated with abstract motifs or with inscriptions or low reliefs that are related to the noble family or the Scuola that financed their construction. A “Scuola” in Venice was a brotherhood of people who gathered together under the protection of Jesus, the Virgin or a Saint they whorshipped; they acted as a welfare institution and did some charity works or helped poor people. The well located in Campo dell’Abbazia is decorated on three sides with low reliefs that represent members of the brotherhood while they are on their knees, holding the symbol of the Scuola, the initials SMV (Santa Maria Valverde). If you see those initials on other buildings around Venice, this means that they were financed by the same brotherhood!

Once upon a time the Acquaroli 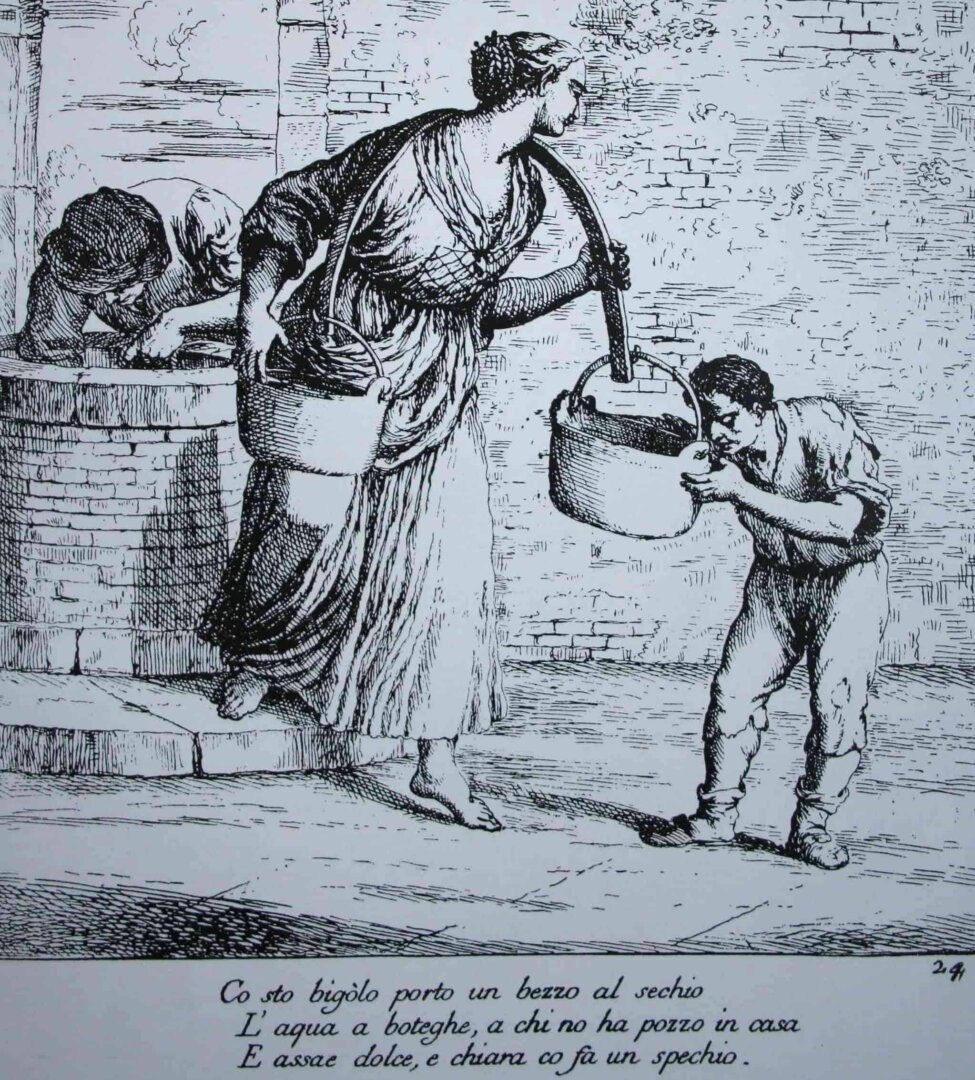 In the 1500s the demand for water was so high that wells were no longer sufficient and water began to be imported again from the mainland. This service was run by the “acquaroli”, who loaded drinking water on their boats and sold it in the city. The aqueduct will arrive in Venice only in the 19th century, in this period they will also position the copious iron fountains that can still be seen in the city.

Yes, you can drink it now! 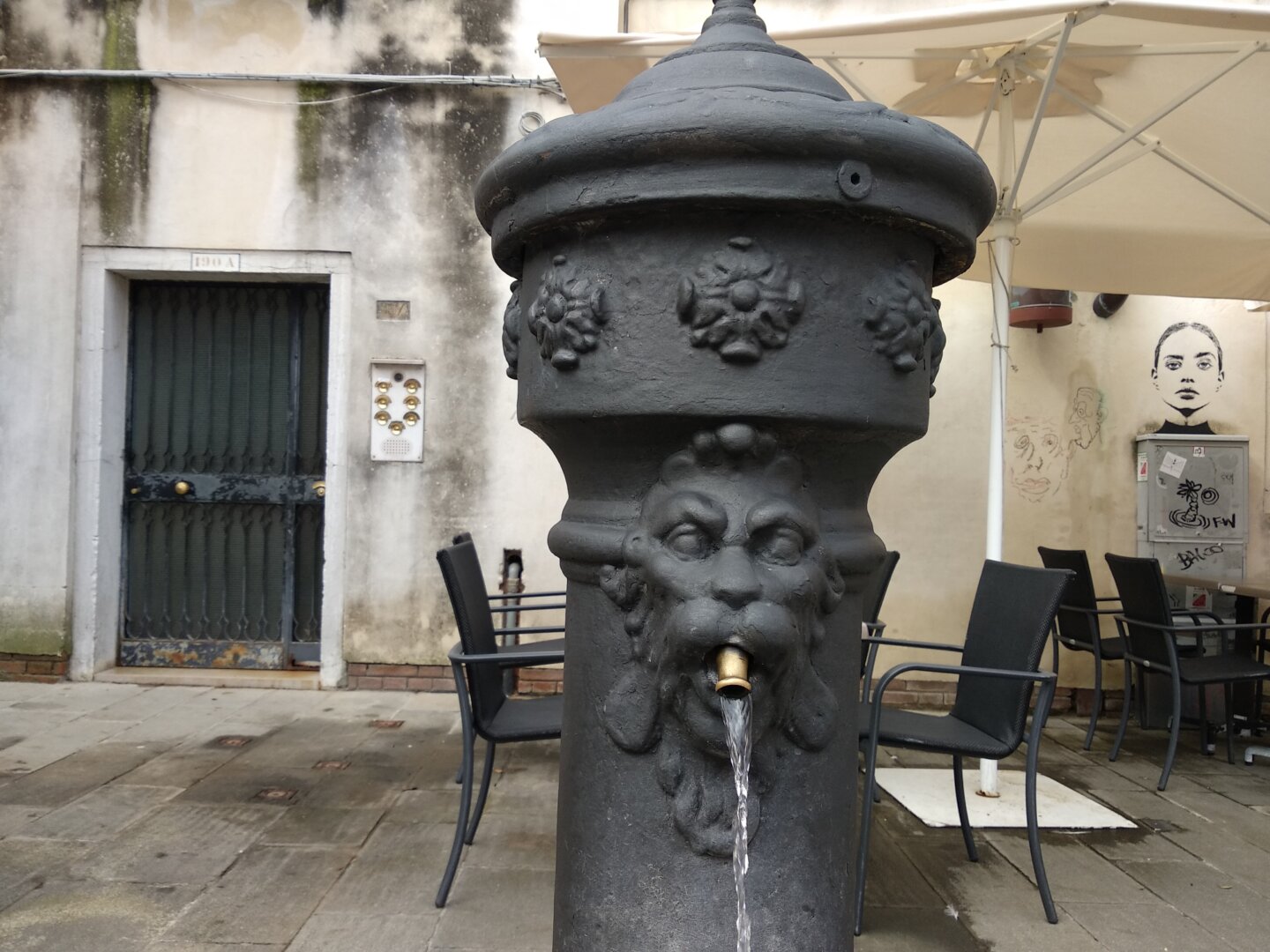 The water in these fountains is now free, drinkable, clean and at 0 km, always controlled and therefore excellent for refilling water bottles and helping the environment avoiding the waste of plastic, use them during your walks in Venice. Venice water is one of the best in Italy, constantly monitored; it is pumped directly from the underground layers of the mainland or it comes from the rivers that flow into the lagoon, which is filtered. Some fountains have a continuous flow to prevent water from overheating and accumulating bacterial load, the unused water is not wasted, it is collected, filtered and put back into circulation. During winter many fountains are closed to prevent pipes from freezing, they are functional again in spring. Fountains are an indispensable resource during sultry summer months, a refreshing break even for our furry friends! Some fountains are located near or inside a Venetian well, others in public gardens, others in hidden calli. We will show you some interesting one during our Streaty Venice food and wine tour.  In most fountains, water flows from the mouth of a lion, the  symbol of the Serenissima, use them during your visit to Venice, help the environment and take advantage of this free resource in the city!