Stanley Tucci’s Searching For Italy documentary is a must a watch. Its story telling is simple but deep. For once we have show that pushes away stereotype and tells Italy the way it really is. Stanley is a myth for us at Streaty. HIs ‘Big Night’ is largely considered one of the best American movies talking about Italian food culture.

Searching For Italy episode in Sicily

The Searching For Italy Sicily episode is incredibly well done. Stanley reads Sicily through its food, its history and its personality. Stanley’s sincere passion and interest is directly expressed by his manners and his questions. Passion is also the key of our Catania food tours. Leave the chic halls to tourists and come experience the streets with us!

However, Nobody and Nothing is perfect. In the article we point out few things that could have been done better!
😃YES!= Stanley rocks!
🤔NOT REALLY = something to point out 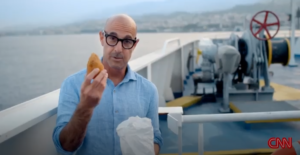 Arancini on the ferry

😃YES!:  Stanley hits the spot! The food experience of Stanley Tucci in Sicily starts with a top-notch tip for watchers! you will see Stanley having Arancini on the ferry boat that crosses the Strait of Messina, that 1.6 mile of deep blue waters that separates Sicily from Italy.  Indeed, having the arancini on the ferry is a real modern habit for all Sicilians on their way out and in to the island. You will see Sicilians on the deck standing, eating and watching home getting further and further. Their eyes are shiny. On the way in, you will see Sicilians with bright smiles biting the Arancini while getting closer and closer to home. Their eyes are bright. So well done Stanley! The arancini on the ferry isn’t probably the best arancini you can eat in Sicily, but as Stanley says ‘It’s the taste of home’. As the ferry staff confirms, the arancini kick off was very much appreciated by Stanley Tucci and the CNN crew, ‘the only shame is that the cruising is too short’…you’re right Stanley!

🤔NOT REALLY: Are you really really sure that Arancini is the correct name to call that street food? Well, you must know that Sicilians have been arguing for decades over the real name of this delicious street food. Somebody call it Arancino-Arancini (masculine noun), others call it Arancina-Arancine (feminine noun). The argument extends over the linguistic field. What should the real shape be? Pointed like Mount Etna or rounded like an orange? Read our blog post on Arancini. 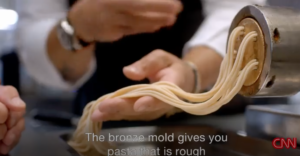 Spaghettony: Stanley at the Michelin starred restaurant I Pupi

😃YES!: ‘don’t mistake uncomplicated for bland’. Stanley underlines that the uniqueness of Sicilian does not resides in its complicated and researched combination of ingredients, but it resides in its freshness and delicate simplicity. Very true! Standing ovation! The I Pupi restaurant is currently considered the best gourmet restaurant in the province of Palermo. The quality of products is over the top. The way products are treated is heavenly. The way it feels in your mouth is…OH-MY-GOD! As you can see in the documentary, the chef is very nice and welcoming. Nothing has been filtered by CNN cameras. Mr Toni Lo Coco is a real host, the way you see him on camera. Tony cooks for Stanley some pasta with bottarga (tuna egg)…’an eruption of flavours’ is the response given by Stanley’s taste buds. We are so fascinated by Stanley’s manners at interacting with locals. His attempt of speaking Italian are quite cute but they definitely sets the right comfy mood for all the characters involved in the scene.

🤔NOT REALLY: Sorry Stanley but we really want give you a hard time in this article! 🙂 It is true that many evidences date the invention of Spaghetti back to the Arab times, but it’s not correct to say that spaghetti were brought to Sicily by the Arabs. In fact, Arab travelers reported the existence of spaghetti in Sicily during the Muslim domination (9th to 11th century). So, to be more precise, we should say, that spaghetti were allegedly made by Sicilians during the Arab domination. 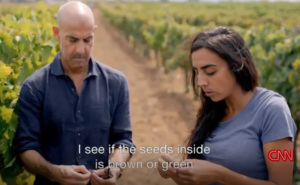 😃YES!: ‘I’m hardly a wine expert but I do know that I like drinking it’. We love this line. Finally a show man who does not pretend to be an expert in everything. We love you Stanley!
During his trip to Sicily, Stanley Tucci reserves a day to visit the vineyard of Arianna Occhipinti. Arianna’s wines delight the palates of foodies and gourmand from all over the world. Arianna’s story is very interesting. It starts like thousands of other Sicilian stories. A young smart professionals that leaves the island to build a career in a land of better opportunities. If thousands go, hundreds come back. Arianna belongs to the latter group. Her love for Sicily couldn’t keep her away for too long. She came back to Vittoria and started her own wine making business. We do recommend you visit her vineyards and join her wine tasting offers. As Stanley says ‘Sicilian aren’t easy to be celebrated on their own’. They often need a blend to have more elegant results. But Arianna’s wines prove that passion and knowledge can turn a reputation upside down. #Delicacy is the keyword. 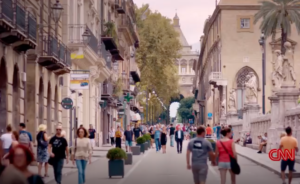 YES! We did realize that Searching for Italy is a great documentary series because Stanley and his crew have been able to understand the real soul of Sicily without falling in the trap of stereotypes, as the large majority of documentaries about Italy do. When it comes to describe Palermo, Stanley Tucci’s words match perfectly with the camera frames. Palermo is the capital of contrasts, and this is the real fascination that convinces many foreigners to move in town. The dark backstreets, the hidden history, the noisy and rough markets, the golden bright churches and palaces. Palermo is pure passion. It’s a nice surprise for all travelers whose most common expectation is to find a grey dirty city without personality. If you want to get to know the city the way it is, without touristy filters, let us walk you around on a Palermo Street Food tour.

🤔NOT REALLY: ahi! Stanley, this time you disappointed us. We enjoyed very much your introductory lines to the city of Palermo. But Stanley…how could you forget to mention the Roman domination which actually built the basics of Sicilian cuisine!? For instance, the cult of Anchovies in Sicilian cuisine comes from roman times. Stanley mentions the Phoenicians and then jumps more than a thousand years ahead to the Arabs. We will forgive you Stan because after all We do consider Arab times the most fascinating chapter in Sicilian history. 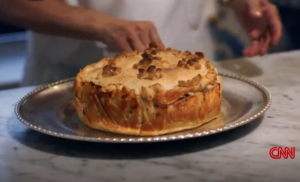 Stanley Tucci at dinner with the Princess

What we really enjoyed about Stanley Tucci’s episode in Sicily is his comfortable charm with all the locals he sits and talks with. His fine humor and gentle manners give their best at the dinner with the Princess di Raffadali. We felt so moved at seeing Stanley in front of the Timballo di pasta, the ultimate recipe challenged by Primo and Secondo, the Italian brothers of Stanley’s masterpiece ‘the Big Night’.
😃YES!: thank you! for once, we have a big production tv show talking about the decline of mafia in Sicily. Dear Stanley, today Sicilians are very thankful to you for this words. Usually Tv’s and magazines prefer to feed the monster stereotype depicting Sicily as the land of mafia. You know, mafia sells a lot! 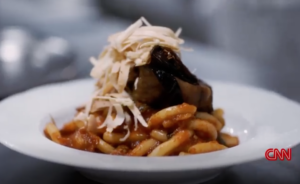 😃YES!: pasta alla norma is the most iconic of the Sicilian pastas. Stanley is hosted at Me Cumpari Turiddu restaurant and welcomed by the pure smile of Roberta Capizzi. Pasta alla Norma is seasoned with tomato sauce, basil, fried eggplant and finely topped with grated dried ricotta!

🤔NOT REALLY: Stanley states that the eggplant was brought by the arabs in the ninth century a.D. Mmmm…not really. Eggplant was apparently imported to Sicily by the Arabs six centuries later. The noun eggplant only enter the European vocabulary in the 18th century. And why is it called like that? because it was referred to an ancient species of white vegetable aubergine with an unusual shape of an egg! So, to be precise, the purple veg should be called Aubergine. 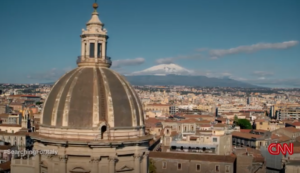 😃YES!: We do love the way Stanley describes the love and fear connection that Eastern Sicilians have with the Volcano.

🤔NOT REALLY: we think Catania would have deserved a bit of more attention. Catania is actually one of the oldest cities in all of Italy. You can walk around Catania and bump into a roman theater after another! And how come you missed the fish market of la Pescheria?!!? it’s the most impressive fish market in all of Italy.

But Once again, we do forgive you Stanley. We worked with many TV shows and we know that sometimes you have too much material and the only thing you can do is to cut. Well for all you have stitched up in this episode, we simply thank you Stanley.

We know what you were thinking while watching the episode or reading this article. We wanna go there and eat the same stuff! Well, please find below the places in Sicily where Stanley Tucci sat and devoured the food.