The story begins with an email “we are coming to Palermo to shoot Rick Stein’s long weekends. We like what you do and we would like to meet you and maybe feature you in the episode”. My first reaction was ”who the hell is Rick Stein?!”. However, that wasn’t important coz the thing that caught my attention was “BBC2”, more than enough! So I googled “Rick Stein”. A series of photographs came up, a classy gentleman in pink shirt showing a shy smile straight to the camera. Ok, so that’s the guy…Rick Stein looks nice. He was glad to join us on our street food tour in Palermo!

The day of the shooting arrived. The minivan with the BBC crew parked in front of my vespa. Rick-Stein-Palermo was going to be my hashtag! I recognized the pink shirt guy right away, “so, finally, you are Rick!”, he smiled back “Yes, he looks nice” I thought. Shooting started with a hardcore Palermitan street food, the “frittola” (veal gristles). Rick loved it, good start! Nothing was planned for the shooting of Rick Stein in Palermo. The director David simply said “just let Rick know what this stuff is and…you know…follow the flow! ”. I did it, Rick did it (of course he did!). 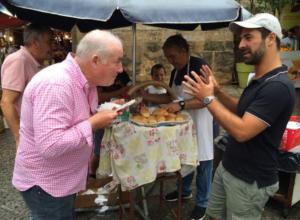 Cool, shooting went on in the fish market and that was the moment when I realised that Rick is a chef not a showman. His eyes couldn’t stop turning and twisting around the fish benches “what’s that Marco? what’s this Marco? How you cook this? how you cook that?”. Rick’s finger pointed at the capone fish a mediterranean fish normally fishes in autumn. No matter if the cameras were on or off, I and Rick kept discussing about fish and recipes. I explained Rick some local recipes and unveiled some secrets of the market. “I might send some of my cooks to Palermo so that you can tell them about these stories and recipes” he said. He never did it, but c’mon! I don’t think he keeps a photograph of me in his wallet! I know you want know more about Rick Stein’s experience in Palermo. What I can tell you is that I loved shooting with him and he was glad to join my street food tour in Palermo!

I joined the crew for three days, two days as episode’s character and one full long day as local fixer, so I will not bother you with other useless stories, I will give you what you want instead!
And here it is…Rick Stein’s favorite food and places in Palermo!

RICK STEIN’S FAVORITE PASTA PLACE IN PALERMO
Bisso bistrot – piazza Quattro Canti
We had just finished shooting at the Quattro Canti when hunger knocked on our bellies. If you hang around the Quattro Canti, you can’t miss having lunch at Bisso. Of course we did not miss this opportunity! Rick had pasta chi vruoccoli arriminati, a typical Palermitan dish. A couple of glasses of wine and the mood was set for…siesta! But siesta comes after lunch, what happened during that lunch. Rick called the waiter and said “how do you manage to make this size of pasta?”. He got no answer but an invitation to step in the kitchen and talk to the chef. So, Rick entered the kitchen to learn the secrets of that pasta making. I told you, Rick is a chef more than a showman.

Easy, pane e panelle. It’s a typical street food specialty from Palermo. Chick-pea fritters served in a soft roll called vastedda. He simply loved it. In the Palermo episode you see Rick cooking the panelle at the Duchess’. We do recommend to take a class with her if you come to Palermo, it’s not just about cooking, Nicoletta is a lovely interesting woman.
I know, you are lazy, you don’t wanna cook, you just want to eat, don’t you? Well, during the shooting I and Rick shared a pane and panelle and a beer in one of my favourite spots in town. An anonymous place where you probably wouldn’t stop unless you are hanging around with a real Palermitan friend. You wanna meet a real palermitan friend? if you wanna a local friend, we streaty guides are here for you 🙂 c’mon I’m going to reveal you this secret. Favorite place of Rick Stein in Palermo for panelle is the Friggitoria Dainotti at the market! 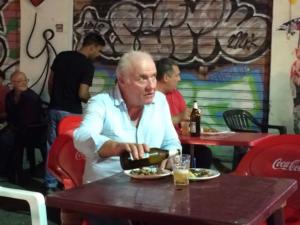 Forst, needless to say. This was probably the very first crucial tip I gave Rick during his stay in Palermo “Rick, when in Palermo, forget Moretti or Peroni beers, those are for average commercial men. Palermitans, real Palermitans only drink Forst beer”. Then you probably think this is a local beer. Not only it is not, but it’s actually brewed on the opposite side of Italy, Trentino Alto Adige, almost Austria! So Why was Rick forced to try and keep drinking Forst? Coz Forst company owns a historical beer bottling factory in Palermo which makes it the most distributed and the cheapest in town. In my opinion, Forst is also the best Italian lager beer available in the market. Probably you don’t trust my opinion, then trust Rick’s! He loved it! In the episode you see Rick Stein in Vucciria having a ice cold Forst beer!

RICK STEIN’S HOTEL IN PALERMO
BBC production chose for him a great location in an elegant palace downtown. Grand Hotel Piazza Borsa, same hotel that hosted Paul Hollywood and his crew one week later for the shooting of City Bakes – Palermo. I also joined City Bakes shooting as Paul’s street food friend in town. Paul Vs Rick in Palermo. Who wins? Read our article.

IS RICK STEIN A “DRUNK CHEF”? 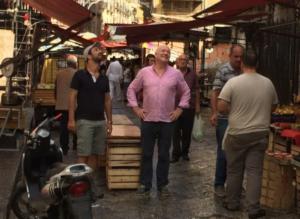 Surfing the web, I realised that Rick Stein’s haters accuse him of being a drunk man. If they say so, it’s probably because on the screen you always see Rick sipping wine. In Italy that is not being drunk, it means being an Italian chef. Ask an Italian how to cook whatever dish, you know what he will reply? “pour me a glass of wine and I will show you”. Let me tell you one more thing. We actually had the feeling that Rick Stein looks a bit childish on the screen, whereas, in presence, he is much more charismatic, elegant and self confident. Well…I spent only three days with him, so, this is just my impression.

ME SUPERSTAR!
When the Palermo episode was released, I became a superstar in my own town! Ehhehe! How fun! I couldn’t expect such a thing! English and Australian tourists were stopping me in the streets “I know you, you were in Rick Stein’s show in Palermo, Marco right? Can we have a picture together?”. You cannot imagine how hard being a celebrity is! Ehehhehe! 🙂 only I and Rick can understand this! Ehhehe! just kidding! 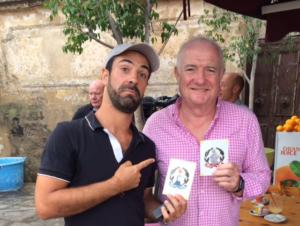 Rick Stein’s show had a fabulous impact on the way British and Australians see Sicily. You can’t imagine how many people emailed us saying that they had decided to come to Sicily after watching Rick’s episode in Palermo. It’s so impressive to see how a TV show can hijack travel destinations. This is one of the reasons why we always help TV productions shooting in Sicily.

But the most important benefit of working with TV productions is that it gives you the chance to meet special people, like Rick, David, Arezoo and all the BBC2 crew. On behalf of all Sicilians, Thank you guys!