« Back to Blog
👨🏼‍🍳 Rick Stein, a legendary English presenter but more than that, a legendary chef specialized in seafood and obsessed by the authenticity of its recipes. Rick is an old style gentleman wearing a limited edition light pink shirt!
👨‍🍳 Paul Hollywood, tough judge of Bake Off UK and USA series with a fascinating deep voice, born to allure ladies…and foodies! Paul is also a talented chef, a real experienced expert of bread making!
👨🏻 Marco Romeo, me, just a bold and bearded Sicilian guy with a genuine passion for food in all its forms…especially the eaten one. I had the pleasure to host both Rick and Paul in the streets of Palermo during our Palermo street food tour as a street food expert. I also had the chance to take part in their renowned TV shows “Rick Stein’s Long Weekends” (BBC2, Palermo episode on air in December 2016. Keeps repeating) and “Paul Hollywood’s “City Bakes” (Food Network. Palermo episode on air in 2016. Repeating in May 26th at 8 pm).

We could simply whistle the end of this match by coronating Rick as the winner of the Palermo experience. Rick tried and enjoyed the most famous love-or-hate Palermitan street food: the spleen sandwich. As for Paul, he didn’t even dare to try the tasty tripe soup “Trippa alla Livitana” that I offered him in Ballarò (featured in the episode). On the other hand, Paul was probably the only tv showman or chef that really impressed the best arancina maker in town. At the end of the shooting the mama told me: I’ve never met anybody, not even in my family, so good at rolling and shaping the arancinas. This  guy is a natural!
Both Paul and Rick have a very strong personality. How did I get this in such a short time? Well, in Palermo is easy, strong men drink Forst beer instead of the more commercial Peroni and Moretti. Paul and Rick…well done,10 out of 10!
First half: 1-1 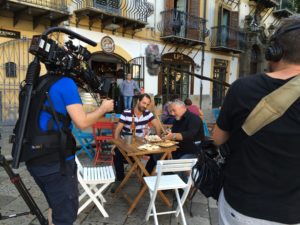 Rick Stein and Paul Hollywood in Palermo: second half

Rick and his Director David simply surf the same wave, Rick knows exactly what David wants and how he wants it. They have been working together for ages and you can say that!
As for Paul, He’s got amazing improvising skills…once again, he is a natural…but sometimes he snaps back and decides to take off on another wave leaving his director swimming around. Number 10 show man!
Second half: 2-2

Penalties: and the winner is…Rick! Why? Rick is a genuine passionate chef. His expert eyes don’t miss a single herb or vegetable on the market benches. This is what probably impressed me the most about him. Paul clicks out of the scene to plan the rest of the shooting as soon as the director say “ok, perfect, cool!”. Paul is a “let’s do it!” showman, He is focused in giving the best on the screen while Rick’s eyes are continuosly hijacked on food direction! Well done Rick!
Final Result: 3-2 for Rick
By the way, the thing that I truly enjoyed during the shooting is that both Rick and Paul Hollywood are very laid-back.

A letter to Rick and Paul

Palermo and all of Sicily have to thank you guys for promoting our land! We are receiving so many emails from travelers with the same opening line “we decided to come to Sicily after watching Rick and Paul on TV”. Thank you Paul, thank you Rick and thanks to Food Network and BBC to make this happen!

ALSO READ 👉 “BEHIND THE SCENES OF RICK STEIN IN PALERMO”