Why talking about Baccalà? this is the answer to your future question! Let’s learn more about this traditional Venetian food. There is no Bacaro in Venice without a cicchetto co

ONCE UPON A TIME…

Before the discovery of the Americas, Venice was considered the access gate to Europe. Rialto was the navel of spice trade. There were no merchants like Venetian merchants and I would say, still there aren’t. Venice was the key of everything.

Now, let’s turn the story into history. Early 15th century, the Cristiano Ronaldo of merchants in Venice had a name, his name was Pietro Querini. On October 12th 1432, after a complicated trading expedition to the north seas, Pietro came back to Venice with an interesting souvenir, a load of 60 “stocfisi” (stockfish). Venetians fell in love with it and the marriage was celebrated in the kitchen, lately giving birth to few children: baccalà mantecato, baccalà alla vicentina, baccalà conso, baccalà alla cappuccina and more. 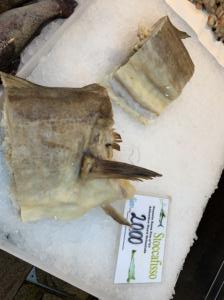 WHAT IS THE DIFFERENCE BETWEEN STOCCAFISSO AND BACCALA’?

Stoccafisso or Stockfish means codfish naturally dried open air under the action of cold wind. Baccalà means salted and dried in rooms for about three weeks. Baccalà needs to be washed in water for about three days before being treated in the kitchen.

A curiosity: Venetians don’t use baccalà for their recipes but stockfish! So why do they call it baccalà? The reason seems to be phonetic. In fact, the word baccalà fits better with the sound of Venetian dialect where many words are cut down with a stressed vowel. 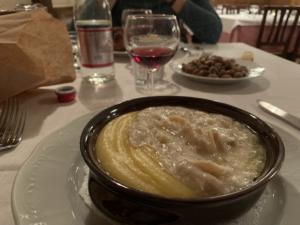 THE CONFRATERNITY OF BACCALA’

The Confraternity of Baccalà was founded in 1987 in Sandrigo (province of Vicenza, Veneto). As published on the official website, the mission of the Confraternita del Baccalà is to preserve the original recipe of the baccalà alla vicentina in the centuries.  The Chef Union leads many activities, such as the Baccalà fest, publications and most important, gives official recognition to those restaurants who follow THE RECIPE. So, if you are looking for the right restaurant to have baccalà alla vicentina, check the official list

THE RECIPE OF BACCALA’ ALLA VICENTINA

Open the stockfish, dress it with Garlic, parsley, flour, olive oil, anchovies, olive oil. Cut it and carefully place the chunks of fish in a clay pot and cooked for 2 hours on low fire. I am summing up the recipe in two lines, I might get killed for this. IF you wanna learn the proper recipe by the proper chef of the confraternity watch this. 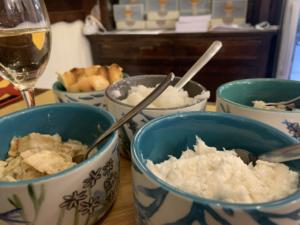 THE RECIPE OF BACCALA’ MANTECATO

The stockfish is cooked for about 30 minute in water and milk, then gently blended with the addition of garlic, parsley and olive oil. The result is a delicate milky fishy cream, irresistible. It is served on a slice of bread or cornmash and it must go with an ombra of red wine!

THE RECIPE OF BACCALA’ CONSO

Less popular than the former ones but as delicious! “Conso” means “dressed”. Boil the stockfish in water with parsley and garlic. Reach the boiling point, turn the fire off and let it rest for 15 minutes. Serve it with olive oil, few drops of lemmon and black pepper. A white wine or a rose will do the rest. Wanna try a delicious one? when in Venice, go to Baccalà Veneto in Sottoportego dei do mori (Sestiere San Polo).