Naples is street food. And this is an indisputable fact. Every corner of the city hides a nice and characteristic place where you can enjoy a culinary specialty. If there is one almost mystical experience you absolutely must have in Naples, it is to taste the delicacies of local street food. Search no further, our street food tour of Naples is the real stuff for passionate foodies!

Among the alleys of the historic centre of Naples, in its squares and even on the city’s seafront, every hour of the day is a riot of strong flavors, intense aromas, and decisive tastes. Whether you are standing in line in front of the Chapel of San Gennaro or indulging in a stroll through the colorful Spanish Quarter, you will find it absolutely impossible to resist! Wait up! What is street food? as Streaty Naples guide Alessio says “street food is about carving great things out of poverty”. 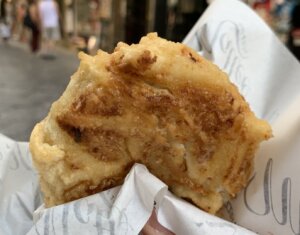 Like so many traditional Italian dishes, we are dealing with a poor recipe that comes from the peasant tradition. The one in which food was little and precious, and there were no leftovers to throw away. So for frittata di maccheroni, the origins go back to a time when even the act of cooking itself was more challenging; so maybe you cooked the pasta once, even for the next day. So imagination got in the way: by adding eggs and cheese, a plate of spaghetti became an entirely original recipe. The Neapolitan frittatina di pasta is one of the most popular street foods in the Neapolitan tradition. They are prepared strictly with maccheroni, which, once boiled and cooled, are topped with a firm béchamel sauce, peas, diced cooked ham and grated cheese. The dough is left to compact in the refrigerator and medallions are made, which, when passed in a batter made of water, flour and salt, are finally fried in hot seed oil. Crispy and golden on the outside, but with a soft and creamy heart on the inside. The frittatina di pasta can be enjoyed in the alleys of Naples, while strolling or waiting your turn outside one of the city’s many pizzerias, as an appetizer to a delicious margherita. 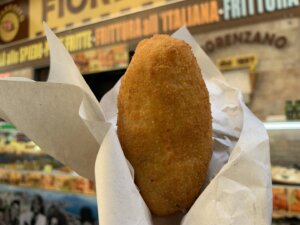 The crocchè is a must of Neapolitan street food. Much loved by Neapolitans and tourists alike, it is prepared with yellow-fleshed potatoes, which are less watery and more compact, and mashed in egg and breadcrumbs for a crispy and flavorful breading. Some say this delicacy derives from the “croquettes” (croquettes) of 18th-century Angoine France, a food particularly prized by the king and his court. In fact, the earliest written recipes date back to a 1798 treatise by Antoine Augusten Parmentier, a nutritionist at the court of King Louis XVI, in which the use of the tuber, then considered an extremely poor food, was valued. However, according to other sources the crocchè was brought to Naples by the Spanish conquerors as “croquetas de jambon”. The “panzarotto” was sold in the streets of the historic center by the “panzarottaro” who would attract the attention of passersby by shouting “Fa marenna, fa marenna! Te ne magne ciento dint’ ‘a nu sciuscio ‘e viento!” (“Get a snack, get a snack! You eat a hundred in a puff of wind”). Today you can still enjoy it in the many fry shops and pizzerias that crowd the streets of the city. 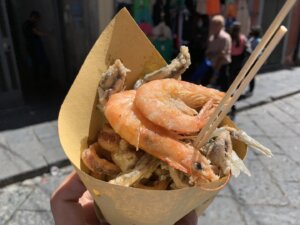 The fried cuoppo, or cuppetiello, is the ultimate Neapolitan street food. It is in fact an absorbent straw paper cone filled with fried finger food. The tradition of the fried cuoppo dates back to the 1800s, when those who were poor would buy smaller, unsold pieces of the catch at the fish market, with payment deferred to 8 days. These pieces were dipped in batter, fried and eaten in the street. The Cuoppo of fish in general contains fried anchovies and salt cod, zeppoline di mare with seaweed, breaded and fried calamari rings and moscardini.

If you say street food in Naples, this is what comes first, the legendary Pizza Fritta. A dish with humble peasant origins, as custom dictates, stuffed with tomato, ricotta and cicoli (pork greaves). A real delicacy that Neapolitans have decreed a true work of art. The expression originated in the postwar period when pizzaiuoli would prepare the dough for fried pizza on feast days, the women of the house would then fry them in pans and sell them outside the bassi, the classic street-front houses in the city’s historic center. This authentic street food is stuffed with every good thing, dip fried and served wrapped in straw paper. It seems to be made on purpose to be enjoyed while strolling through the streets of the city, smelling the scents of this wonderful land but above all, tasting its genuine and intense flavors. 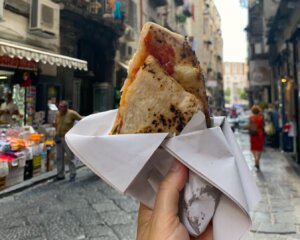 You are in Naples, walking through the city’s alleys, touching the capuzzelle placed in front of churches. In the distance a lady calls to her son from the balcony who is playing soccer with friends, it doesn’t matter if it’s 4 p.m. or 10 p.m., he will be there playing, you know. You get peckish but don’t feel like stopping at a pizza place, what do you eat? The answer is simple: pizza a portafoglio! (Tr. wallet pizza). In her book “Il ventre di Napoli”, Matilde Serao speculates that the origin of the pizza a portafoglio can be attributed to the historic Port’Alba pizzeria, founded in 1738. It was a simple and poor dish, intended for those who were very hungry but had little money. The pizza a portafoglio is smaller than the regular one served in pizzeria. Its name is a clear reference to the way it is served. It is folded on itself, first on one side and then on the other, and then wrapped in a piece of paper and finally enjoyed. It is perfect for savouring on the go, paying close attention, however, to the tomato sauce, which could end up on your pants or worse, on your shoes. 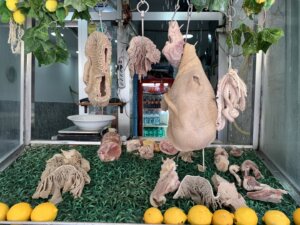 A poor and very ancient street food: Neapolitan. The appearance is not the most inviting, it is true, but on the palate it is a delight. We are talking about Neapolitan ‘o pere e muss’: pig’s foot and calf’s snout. Basically, it is a cold salad made from the meat scraps and gristles, sometimes even udders and tongue. Although it is “a salad,” it is one of the cornerstones of Campania’s street food: served in a well-oiled cuoppo, with salt and plenty of lemon. Although it is not “tripe” in the strict sense of the word, the sellers of this dish are called “trippaiuoli.”

Small stuffed “sandwiches”, made with a dough wrapped with a filling typically prepared with cured meats and cheeses. The original recipe for Neapolitan sandwiches is perhaps one of those recipes that is so traditional that it is passed down from generation to generation with appropriate modifications depending on the preferences and customs of the families. One thing is certain: these tasty delis are made with simple ingredients, spiced with salt and pepper and “fattened” by sugna (or lard), which replaces butter or oil, typical of more modern recipes. The scent they give off, even before their inviting appearance and irresistible taste, attract passersby 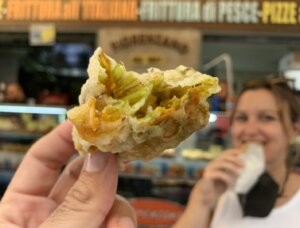 Ciurilli fritters are a mouthwatering and irresistible appetizer made from battered and fried squash blossoms. A great classic of the Neapolitan tradition, they are prepared in the frying shops in the alleys of the historic center and enjoyed inside the famous cuoppo. Wanna try this at home?
Clean the flowers and remove the central pistil; fill them with ricotta mixed to chunks of provolone or fiordilatte cheese (better if from the day before, as they have less buttermilk) using a teaspoon; close by wrapping them; quickly dip them in whipped egg whites and fry until golden brown. The dish is ready to be devoured! 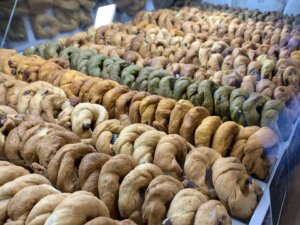 From poor dish to luxury aperitif, the story of a dish born by chance. ‘Nzogna pepper and almonds: the Neapolitans’ most beloved savory snack. Neapolitan taralli have always been considered the ideal company for outings and trips out of town. Tasty and crumbly, they are anything but light. What today is called a delicacy and consumed as street food, once fed mouths and satiated hunger pangs. The history of taralli in Naples dates back to the 1700s. It began as a salvaged product of leftover bread dough. Bakers, who would never give away the “sfriddo,” combined these leftover leavened dough with lard and pepper, made two strips of the dough, twisted them and baked them together with the bread. The taralli, once cooked, ended up in the “tarallaro’s sporta”, or wicker basket. This figure was once very characteristic and one would cross several of them around the city of Naples. In the early nineteenth century, at the behest of no one knows who, the tarallo was enriched with almonds, whose flavor went well with pepper. Some specialists claim that the tarallo should even be soaked in sea water.

Today, this delicacy, is often consumed as an aperitif, in homes, as well as in pubs, and to accompany it there is always a good cold beer. It must be said, however, that given its caloric intake, it could easily replace a meal. It is still a classic to buy in the little kiosks scattered along the Caracciolo waterfront, a bag of taralli and munch them while strolling.

So…How hungry are you feeling now? 🙂 Check out our food tours in Naples!