It was summer of 2016 when we got contacted by Jamie Oliver’s magazine planning a food trip to Catania. For the occasion we arranged a private street food tour for Jamie’s publisher Paul Dring and his photographer Matt. We took them to our selected food spots as featured in the Streaty street food Catania tour and showed them some hidden gems of the old city. The magazine was published in the end of 2016 featuring our best tips and ending with special thanks to Streaty for its contribution. In 2017 the official website www.jamieoliver.com posted an interview to Streaty’s Manager Marco. The interview has been recently unpublished due to Jamie Oliver’s website updates. We managed to save it! Here it is! just for you my dear streaties!

What did you do before you started doing street-food tours?
I’m graduated in foreign languages (arabic and english), so I was mainly employed as English teacher for kids or translator/interpreter from Arabic into Italian and vice versa. I was also traveling and eating the streets around the world!

Why did you decide to start running street-food tours? 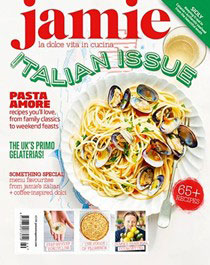 Let me say…Observation+passion to travels! I watched for too long travelers falling in tourist traps and missing authentic local places because feeling intimidated by Sicily’s reputation. Usually travelers get in the main square of the market and then find the nearest way out. They get lost in crowd, they need a guide’s hand. I used to do same walks with my foreign friends coming to visit me in Sicily and in the end I just made a business out of it! I love traveling and I love food. Food can tell about a culture as much as a monument can.  The Food Passport idea came up when I realised that I was taking too many food notes on a travel. The Food Passport just make this work easy! plus it’s a great souvenir!
It all began with Streat Palermo Tour in 2013, its success convinced me to double up the experience by launching Streat Catania Tour.

What makes Sicilian food distinct from the food elsewhere in Italy?
History + weather. Because of its central position in the Mediterranean sea, Sicily has always been an important strategic territory as a base to control the trading traffic. Sicily’s been colonized by many populations: Phoenicians, Greeks, Romans, Bizantines, Arabs, Normans, Spanish, French. And everytime these people marked the Sicilian territory with new forms of art and new forms of cuisine like nowhere else in Europe. The result is that each food specialty tells you a different historical chapter of Sicily. Take a bite at a pani ca’meusa in Palermo or a minnuzza in Catania, in two bites you will swallow centuries of Sicilian history.

Why does the weather play an important role in the spread of street food? 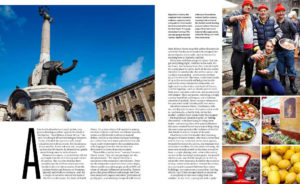 Well…the word itself says it right…street food. How can you have a popular street food culture where cold temperatures doesn’t allow to consume food in the streets? 🙂

Do Catania and Palermo have a big rivalry? How does that play out in the cities’ food cultures?
Yes, mainly in football…welcome to Italy!
It’s not only that. Both cities share frustations because one misses what the other has. Palermo is the political center and the historical capital of the island. Catania is the innovative business center of Sicily with a richer soil. Talking about food, I like seeing Palermo and Catania as slices of bread, combine them and you make a perfect sandwich, but why being part of an excellent sandwich when you could be a unique bruschetta? 🙂
The main food issue between Palermo and Catania is the Arancina. In Palermo is rounded and has a feminine name: Arancina. In Catania has a pine-cone shape and it’s called: Arancino (masculine grammar form).
The recipes are almost the same: fried rice croquettes stuffed with minced meat, breaded with breadcrumbs and finally deepfried. The Palermitan rice is yellow because of  safron whereas the Catanese one is red because of tomato sauce. Both supergood but both populations claim to be the masters of it. In this case we have to support the Palermitan cause because the original arancina recipe should not have any tomato. We are talking about a 1000 year old recipe, born before the arrival of tomato from the Americas. Whatever, my suggestions is…try them both!

What are your favourite places to eat in both Catania and Palermo? 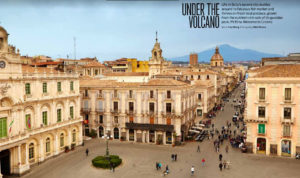 In Palermo do not miss Madame Dainotti’s arancina. In Catania don’t miss a cipollina at Bar Mazzini.

Do you still come across new foods or learn about new stories or historical facts as part of your job?
It’s a never ending field of studies. Street food is slowly entering the gourmet cuisine. Tradition and innovation are giving birth to new interesting recipes. I personally don’t miss any chance to sneak in bakeries and restaurants’ kitchens to find out more about cooking technics.  We costantly update our social pages sharing little unveiled secrets of our food culture. Last year we made a big scoop presenting Palermitans a special cut of the spleen sandwich that nobody knew about!

Do you feel it’s important to break down stereotypes visitors might have about Sicily and educate them about the real Sicily?
Absolutely, this is one of the reasons why I decided to work in food tourism. I want travelers to know what Sicily and life in Sicily is for real. Sicily is not Mafia but if you ask any foreigners what he knows about Sicily, the answer is either “nothing” or “mafia”. Tourists expect to see people with guns and they expect to hear gunshots anytime. If you expect to see or hear that in Sicily, sorry to disappoint you, but you are picking the wrong place. We are slowly managing to get rid of reputation but it’s still a long way. Sicily is a safe place to travel.

What is the most rewarding part of your job?
I personally love travelling and this is the kind of experience that I look for when get in touch with other cultures, so it feels great to know I’m helping travelers to build up a memorable experience. We often make friendship with our travelers, so what’s more rewarding than constantly meeting new friends from all over the world? 🙂

Why should a tourist in Catania or Palermo consider taking a tour with you?

Food is good everywhere but who tells you where to have the top quality food according to local standards? the answer is easy, we will tell you! coz the places where we normally go to eat street food are the same places where we take you 🙂 Of course, you can always use Tripadvisor, but Tripadvisor tells you about tourists’ opinion, not locals’! Our mission is to give travelers the chance to have a real local experience without filters of any kind! Our tours are designed for real foodies but everybody is welcome coz during our walks we discuss many aspects of our culture including history and arts.