A trip to the east of Sicily must have a stop on the Mount Etna. However, most of travellers simply head to the top of the Vulcano in order to have a memorable…selfie picture! Our recommendation is different. Mount Etna soil is very fertile and gives birth to top Sicilian red wines, beside almond, pistachios, hazelnut and many more mother earth’s fruits. Enjoy Mount Etna from the bottom to the top. Take your time as you drive up by stopping at some wineries! We wrote this article just for you coz we know you like traveling and would rather spend some time in company sipping good wines than taking a selfie photograph. If you find yourself in the city of Catania and simply want to taste several wines in our favorite wine bars, join Streaty Catania wine tour. Follow our sommelier guide, have multiple toasts and samples and learn about eastern Sicilian wines.

HOW IT ALL STARTED

The history of wine on Etna is both ancient and modern. The Greeks were the first to introduce the grapes in VIII sec. b.c. They called it the “nectar of the gods” and they enjoyed drinking it during the symposia (litt. “Drink together”), after-dinner get together accompanied by music, dancing and poetry reading.

For centuries vineyards were grown on the slope of the Etna using the very same grape varieties and techniques, but the wine was sold as “bulk wine” to “cut” French and Northern Italy wines, to add body and colour.

About twenty years ago, Etna erupted: people saw the potential of this wine and started buying lands. Oenologist were called from Piedmont and few winemakers, like Andrea Franchetti with Passopisciaro winery and Marco de Grazia with Tenuta delle Terre Nere began their adventure. Today, these two wineries alone produce over 350.000 bottles a year, and more than 100 producers followed their example, offering alternative interpretations of Nerello & Carricante, to please every palate. 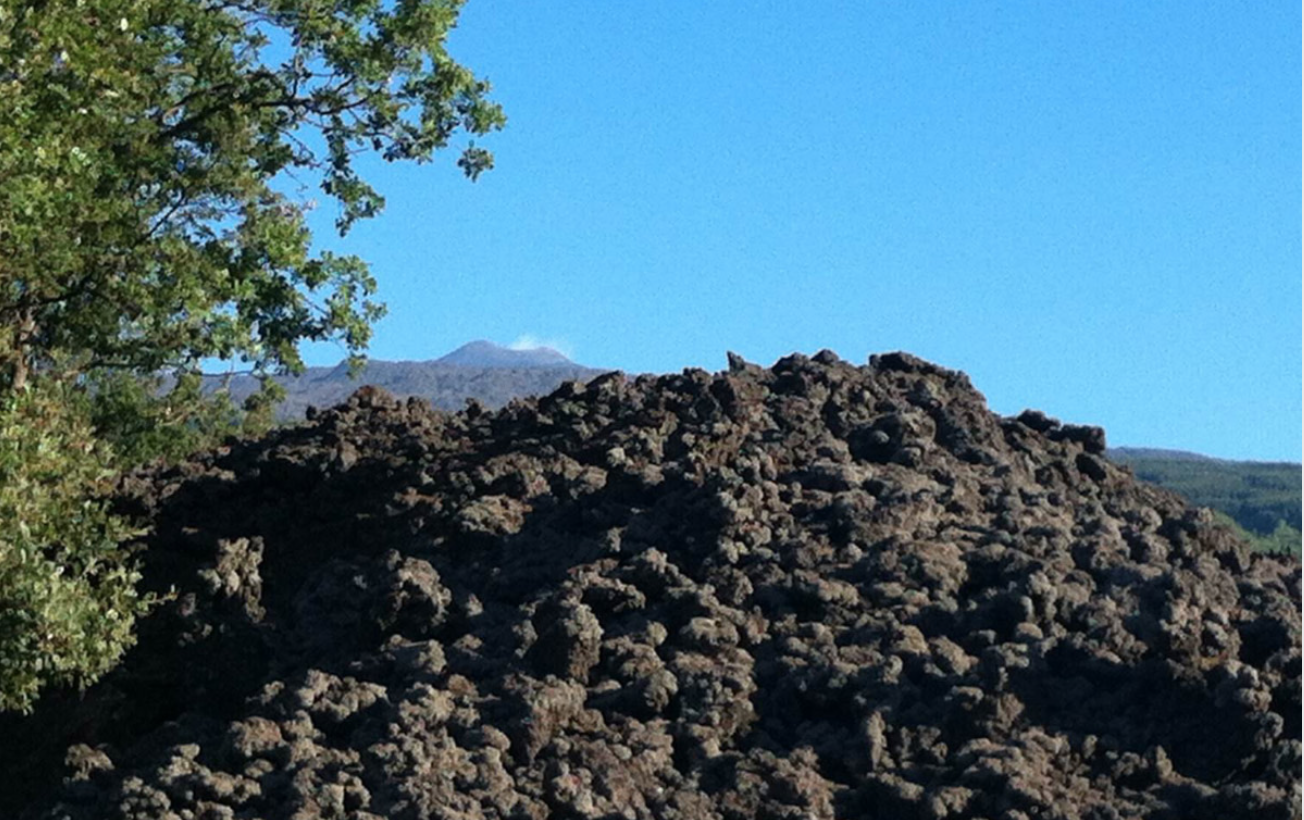 We come across this word at every wine tasting and we find it written in almost every wine label…. But what is terroir anyway? It comes from the latin word “terra” and reflects the combination of soil, climate, and man know-how, in creating a unique environment for the vineyard to grow. And Etna has a very special terroir!

Grown on the slopes of an active volcano, Etna’s vineyards are among the highest in Europe, and are exposed to very extreme weather conditions. Not only do they face greater sun exposure, and 6 to 10 times more rainfall than the rest of Sicily, but also higher thermic excursions, exceeding 30 degrees during summers. But the key lies in the soil, made of hardened lava, ash and sand, contributing to the distinctive mineral taste of its wines. Finally all types of works on the vineyards are done manually, as the sloped terrain doesn’t allow mechanical harvesting. 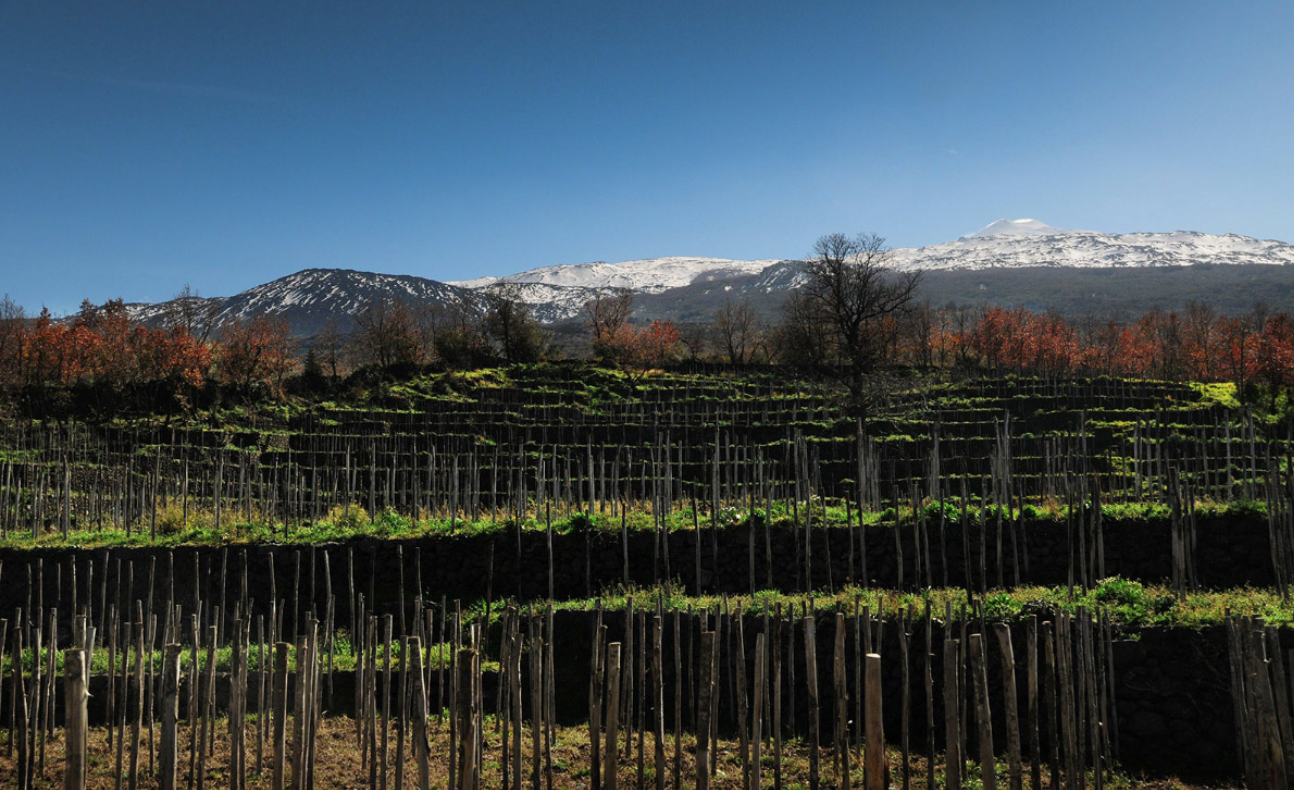 Etna wine was the first Sicilian wine to be recognized as DOC (designation of origin status) in 1968. Produced in an area stretching from Biancavilla to Randazzo, at an height of 400 to 1.000 mt above sea level, it is commercialized in different variants, Etna Bianco, Etna Bianco Superiore, Etna Rosato, Etna Rosso and Riserva, Etna Spumante.

Made exclusively with autoctone grape varieties Nerello mascalese and Nerello cappuccio for the reds, and Carricante for the whites, Etna wines are surprisingly vibrant and fresh, with a distinctive mineral structure that reminds the finest Burgundy wines. It shall not surprise that in recent years, it acquired the nickname of “Burgundy of the Mediterranean”.

Signature red is Nerello Mascalese means “little black from Mascali plain” and it’s undoubtedly the king of Etna. Like its french cousin, Pinot noir – it has a distinct pale discharged colour, and a characteristic aroma of sour-cherry and iron-like minerality. According to 1968 regulations, Nerello Mascalese is the main ingredient of the DOC denomination of Etna Rosso, representing 80% of the blend, and the remaining 20% is composed of the Nerello Cappuccio. The most ancient vineyards are often mixed: if you ask an old farmer, what grapes they grow, they would answer “the grapes of Etna”.

Even if the core of the production is reds, Etna Bianco is definitely a must-try. The basic recipe includes minimum 60% Carricante – 80% for the Superiore variants, produced in the eastern area of Milo. “Pietramarina” by Benanti winery was rated as one of Italy’s best white wines! One sip and you’ll feel its intense minerality, with distinctive sea-salt notes. Enjoy it as an aperitif with toasted almonds, or pair it with fried seafood to appreciate it fully! This is a wine with a great aging potential: over time, it develops petrol-like aroma which is characteristic of the Riesling.

One of the most fascinating aspects of Etna wines lies in the landscape: a theatre of terraced-vineyards grown in the traditional alberello form, which uses a chestnut stick to support the plant. The terraces are built entirely with lava stone, forming walls to contain the ground.

Traditionally wine was made using the palmento, the ancestor of the modern cellar, made in lava stone. The principle is simple: using gravity to make wine. Farmers would press the grapes by foot and the juice would flow on the collection van to ferment. Finally skins, stem and seed would be pressed using a giant torchio. Palmenti are no longer permitted for vinification, but some of them have been reconverted into museums or modern cellars (like at Palmento Costanzo Winery in Passopisciaro).

Would you expect to find on Etna some of the oldest vineyards in the world? Maybe the word “phylloxera” rings a bell? In the late 19th century the phylloxera epidemic destroyed most of the vineyards in Europe. However the sandy soils of Etna managed to survive, and here you can still find some pre-phylloxera vineyards which are over 100 years old! Wine produced from these plants is incredibly sophisticated, with silky tannins and a very complex finish. Curious to try it out? Both Benanti and Palmento Costanzo winery produce such wine, as their TOP label. This might be your chance!

For a more complete overview on Sicilian wines, read the article published by our friends from Travel,Food,Divino “Best of Sicilian wine“!

Interested in visiting an Etna winery? Many producers have opened their doors to travelers. Ask us to arrange you a guided tour, and marvel at Etna’s unique landscapes. The visit includes a tasting of selected wines paired with sicilian appetizers!

Not enough time? Join our Catania Wine Tour and embark on an urban wine tasting adventure, as you discover the hidden corners of the city!