Just like any day of the year, Italians find a holy excuse to eat and devour orgasmic calories. St. Joseph’s day is quite a big day to get extra excuses for extra calories! We streaty guides don’t miss the chance to overstuff clients with caloric treats 🙂 especially if they come once a year like the frittelle offered on our Venice food tours. And St. Joseph’s day comes once a year. Let’s see what’s traditional St. Joseph’s day food in Italy!

The significance of St. Joseph’s day 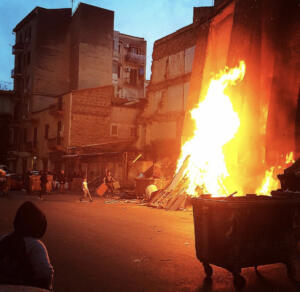 As you know, all religious events are tightly connected to the cicle of seasons. St.Joseph’s day marks the passage between winter and spring, it’s the time to get rid of the past and embrace the warmth of spring. If you find yourself in Palermo on St.Joseph’s day you may have the sensation that the city is on fire. In fact, it is! Sicilians have the tradition to light up the vampe di San Giuseppe (San Giuseppe fires) to burn old wooden furniture. Burn the winter, light up the torch of spring! 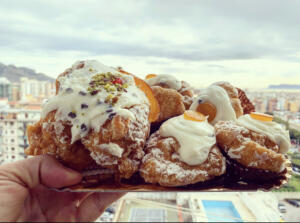 A fluffy cloud of fried dough filled with ricotta cream. The sicilian saying ‘megghiu suvirchiari c’a addisiari? means ‘better too much than too less!’ Is there anything called “too much” when we talk about ricotta cream!?!?! There isn’t. This is why Palermitan pastry chefs over stuff the sfinci with ricotta cream until it pops out of the surface and cover the top of dough.

What’s the meaning of Sfinci?
From Arabic ‘Isfinj’ or sponge. However, you must know that Palermitans often exchange letter F with P, so it becomes ‘Spincia’. And guess what? In Latin ‘spongiam’ means sponge! So we have the ‘spinci’ di San Giuseppe and the ‘spincietta’ (small ones). 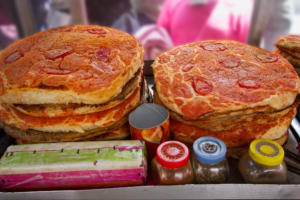 Same linguistic roots of the Sfinci di San Giuseppe. The sfincione is available all year around in the streets of Palermo but St.Joseph’s day is when families make their own at home. A spongy pizza dough topped with a onion and tomato sauce and a sprinkle of aged caciocavallo cheese. 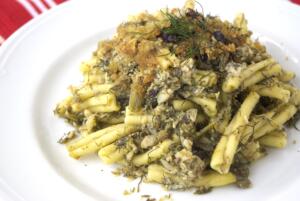 The pasta with sardines is the most traditional of Palermitan pastas. March is the best month to make it coz you get the wild fennel in season! Wanna get the recipe? Download Mamma Streaty’s cookbook. Click here) 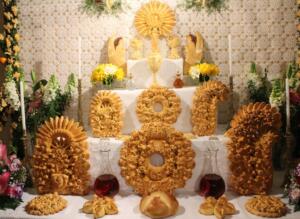 In small towns, Sicilians build up so-called Altari di San Giuseppe, finely decorated with beautiful forms of hard bread. The shapes of bread aren’t random, in fact, every single form is symbolically connected to the figure of St.Joseph and the holy family. You’ll see saws and hammers as carpenter’s tools, other breads simply design a G as initial of Giuseppe. This isn’t just about showing off, St.Joseph’s althars are open to the people

Here it comes the St.Joseph’s soup, prepared with the left overs of pasta, legumes and vegs…wisely scented with a sprinkle of fresh wild fennel and extra vergine olive oil! 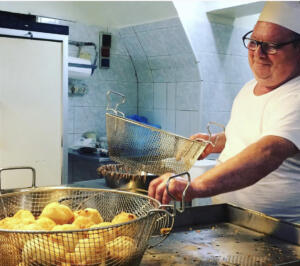 The city of Catania reserves a delicious delicacy mostly unknown among non-locals. We are talking about the crispelle! Soft finger-shaped doughs made with rice flour. You have crispelle ‘dolci’ which are covered with honey and orange zest; and crispelle ‘salate’ which are stuffed with anchovy and ricotta cheese. How do you think we cook it? fried of course! Guidebooks don’t mention the crispelle catanesi. This is why streaty exists! We’ll give you the chance to try the best ones on our Catania food tours. 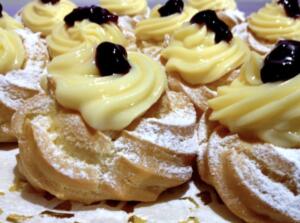 The most renowned among the Italian zeppole are the ones from Naples tradition, the zeppole are spread all over Italy. The zeppole are simply beautiful to see and AMAZING to eat. This is probably the best treat that a custard cream lover can get. The dough as something special, a very thin crusty layer to break before diving into the softness! OH MY GOD!
The Neapolitan zeppole are the most beautiful Italian dessert: twisted in vortex and topped with finely displayed cream.

However, you find many styles of zeppole around Italy, from Veneto to Abruzzo, with different shapes and aromas. For instance, the zeppole Aquilane are made with a potato dough and wrapped like a ribbon.